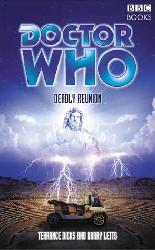 Goofs: Hades claims to have been Cardinal Richelieu and Robespierre, which contradicts The Church and the Crown and The Reign of Terror [he briefly impersonated them when it suited his purpose].

A perigosto stick is described as a musical instrument, which flatly contradicts Love and War [he's being facetious].

Dialogue Disasters: What shocked Jo was that the women, some of them at least, seemed just as violent as the men, attacking men and one another with savage ferocity.

Zeus tells the crowd 'And the rest of you cool off!'

Dialogue Triumphs: The Master describes Hamlet as 'The play that's full of quotations'.

Continuity: The Master smokes Havana cigars (The Mind of Evil). He keeps a well stocked drinks cabinet that includes Napoleon brandy, single-malt whiskey, champagne and Krug. He recently traded in Sarg whilst down on his luck, as part of a scheme to establish plantations on an uninhabited planet and supply the galaxy; his partners were all addicts as well as dealers and ended up killing each other. The Master was left with a supply of the drug and the seeds to grow more, and was approached by Hades who wanted to use them to cause chaos on Earth. Because Hades is trans-dimensional, the Master is forced to work for him, since there is nowhere in the universe where Hades cannot find and destroy him.

The Gods are long-lived beings that have forgotten their origins; some of them believe that they are aliens, although Hermes suspects that they are an early mutation of humanity. Zeus, Poseidon and Hades are the oldest, although they are not yet five thousand years old [they may be the product of the Dæmons experiments (The Daemons)]. Zeus is by far the most powerful of them all, closely followed by Hades and Poseidon. As well as being long-lived, they can change their shape, size and appearance, are telepathic and can teleport themselves (Hermes once tried to teleport a human with him, but his passenger died in the process as only half of him arrived). All of their minds are linked to some degree. Their wounds heal quickly. They are stronger than humans. They draw upon the power of human belief, which makes them stronger. They also have individual abilities; Zeus can influence the weather [telekinetically] and used to do so in both Greece and Italy. Hades can create force fields in the Underworld and can delegate their maintenance to an underling such as a Satyr. Hermes makes himself invisible, although this only works on humans; other Gods can still see him. They long ago decided to pose as Gods, since they preferred this approach to being burnt as witches or otherwise persecuted. Bullets can kill some of them including Hermes, but apparently not the more powerful Hades. The group in Greece was the inspiration for the Greek Gods of legend, who are named after them. Another group on Haiti still pose as Gods, whereas many of their Greek cousins live in secret amongst humanity. The Players (Players, Endgame) are another group, and were once Mesoptamian gods [and may be related to Utnapishtim's people - see Timewyrm: Genesys]. They dwell largely in a trans-dimensional network of locations accessible from portals all over Earth, including one at the top of Mount Olympus, one hidden in a crack in a rock face on Zante, and one on Albania that leads to the Underworld. The para-dimensional continuum of which the Underworld is a part interacts with Null-Space and the Space-Time Vortex [see The Ghost of N-Space]. The Underworld of Hades is one such trans-dimensional location controlled exclusively by Hades himself; other Gods cannot teleport within its boundaries. The Underworld's power is linked directly to Hades, and it is therefore a quieter, more docile place when he is absent. The Gods have used humans for their pleasure for aeons, but the difference in their life spans rules out long-term relationships. Following Hades attempt to seize power in Hobs Haven, Zeus takes the rest of the Gods away from Earth to a far-away dimension.

Hades seeks power for himself, by causing chaos on Earth. Prior to 1944 he has remained quiet for one-thousand and five-hundred years, but attempts to provoke a nuclear war between America and the USSR towards the end of the Second World War, intending to emerge as ruler after the conflict. Following his defeat by Poseidon, he remains quiet again for thirty years, but attempts to cause carnage once more with the aid of the Master during the 1970s. Supposedly mythical creatures that dwell within the Underworld include satyrs, centaurs, Cerberus, chimaeras and gorgons. Satyrs are notoriously stupid and are only interested in sex. The assortment of misshapen monsters that Lethbridge-Stewart and Hermes encounter might be N-forms (see The Ghost of N-Space). The Underworld contains the souls of dead Greeks who believed that they would travel there after their deaths (The Ghost of N-Space). Hades once impersonated Niccolo Machiavelli. He places a mind-lock on the villages of Hobs Haven, so that they will accept unusual events without question. He can't directly read minds, but is highly sensitive to mood and atmosphere. Zeus banishes him back to the Underworld forever.

Prior to leaving, the Doctor held a position of power and prestige on Gallifrey [a rather rose-tinted view of his duties - see Lungbarrow]. He drinks ale, brandy and Earl Grey tea. He has toast and coffee for breakfast. He again adopts the alias Doctor John Smith. He has converted Bessie's cigarette lighter into a laser-torch. He wont let the Brigadier fit Bessie with a radio nor let anyone else drive it. He keeps a tool-kit in Bessie, which he uses to build a homing device for the Brigadier.

During the Second World War, at the age of twenty-one, Lethbridge-Stewart was a Second Lieutenant serving with Intelligence. He was assigned the task of updating the British Intelligence maps of Zante at the end of war. He comes from a long line of soldiers, who have served in the British Army and Indian Imperial Army for over two hundred years and who include four DSOs and one VC. He trained at Sandhurst; according to his final report, he was awarded 93 percent for Officer-like Qualities and 9- percent for Leadership, with the caveat Lethbridge-Stewart seems to believe that he is always right. He speaks sparse French, which he learned at school. He attended Fettes public school. He also learnt Latin, but dropped it in the sixth form. When he was in the sixth form, he alone out of his climbing club managed to scale the north-east face of Ben Nevis. His family expect him to marry a girl named Fiona [presumably the same Fiona from The Scales of Injustice and Downtime], with whom he shared a quick kiss behind the horse box at a Pony Club gymkhana at the age of fourteen, and a more passionate kiss in the Craigs conservatory during his last leave. He lost his virginity to a girl named Vera whilst drunk on the night of his passing out as a fully commissioned second lieutenant. He falls in love with Persephone on Zante, but is induced to forget his encounter with the Greek Gods by the waters of the river Lethe. He used to read science-fiction magazines at school, dismissing their tales of bug-eyed monsters as a lot of rubbish. It is hinted that he is a Christian, since he objects to Hermes' apparent blasphemy about Jesus. He plays cricket, describing himself as not a bad bat and was in the first eleven in his team. A fellow pupil named Flynn minor once stole his new rugby boots just before a Junior Cup match. He almost won the middleweight boxing championships during his last year at Fettes. He ran his first cross-country run at the age of ten. He plays tennis. He prefers coffee to tea. He only ever drinks whiskey neat. He has been around dogs since early childhood. He has done very little flying, his experience consisting of one trip when he was given a lift in an RAF Dakota from Athens to Naples on his first peacetime leave. The Brigadier feels that travelling in Bessie compromises his dignity.

Jo dons a brightly coloured yellow trouser suit. She drinks Coca-cola and lemonade. She doesn't know Sergeant Benton's first name and horridly introduces him as Ben. She is a fan of American heavy-metal group the Osculators. She has been to pop festivals before.

Whilst working undercover, Yates and Benton wear their civilian clothes, Yates in a dark suit, Benton in cavalry twill trousers and a loudly checked sports jacket. The Brigadier sent Benton on a computing course.

Sarg is a narcotic made from the dried leaves of an easily cultivated plant alien to Earth. It causes an ever-increasing, hallucinatory paranoia, marked by suspicion and fear of everyone nearby, and outbursts of murderous rage.

Central Intelligence Clearing House establishes the Unexplained Incidents File, a copy of which is sent to UNIT.

Links: The events of Terror of the Autons are described as recent; since the Master's TARDIS is fully functional, this story must take place after The Mind of Evil, probably before The Claws of Axos.

The Doctor recalls his trial (The War Games). There is a reference to the Golden Grockle inn (see Goofs) on Gallifrey (The Eight Doctors). The Doctor briefly mentions his old hermit mentor to Jo (The Time Monster, Planet of the Spiders). He tells the Brigadier that Sleep is for tortoises (The Talons of Weng-Chiang). He compares Sarg to skar (Catastrophea). There is a reference to the Doctor's boxing lessons with John L. Sullivan (Carnival of Monsters).

Unrecorded Adventures: The Doctor claims to have played lead perigosto stick for the Gallifrey Academy Hot Five until the Faculty closed them down (see Goofs). The Master played drums. The Doctor may have been present at the execution of Anne Boleyn.

The Doctor was a friend of Ernest Hemmingway. They ran the bulls together in Pamplona during the nineteen-thirties and Hemmingway dragged the Doctor along to several bullfights, where he was trained the basics by a matador named Manolito who wanted the Doctor to turn professional.

The Bottom Line: 'Quite a reunion!' The first half, written by Barry Letts and featuring a young Lethbridge-Stewart battling Greek Gods at the end of the Second World War, is a hugely entertaining Boy's Own yarn that captures the future Brigadier perfectly and considerably fleshes out the character's background. Unfortunately, the second half, penned by Terrance Dicks, is the predictable cliché-ridden run-around one might expect from the author of Warmonger, which is a blatant rehash of The Daemons right down to barriers around a small country village and rotating signposts.