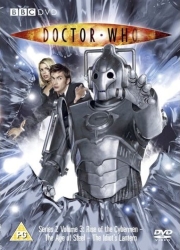 Roots: The announcer mentions What's My Line?. We see Muffin the Mule. The Doctor and Rose are aiming to see an Elvis concert. Florizel Street was the name originally planned for Coronation Street. The Doctor mentions Kylie [Minogue] said "It's never too late". The Connollys listen to an episode of Take It From Here on the wireless.

Goofs: How does the Wire know Mr Magpie's name?

How do the people without faces survive without water and air?

The Bats wings BBC ident didn't debut until December 1953, and the episode of Take it from Here heard on the wireless at the beginning was first broadcast on the 15th of June 1953.

Why does the Wire briefly go into colour?

Why is DI Bishop consumed by the Wire, but the Doctor and Tommy are left intact from her feeding?

The view we see of Alexandra Palace is what you would see from Hornsey or Crouch End rather than Muswell Hill.

When the Wire is recorded onto the cassette, why do the people she's fed on get their faces and minds back?

Technobabble: The Doctor uses his knowledge of trans-temporal extirpation methods to neutralise the residual electronic pattern - or wipe the tape containing the Wire.

Double Entendres: Rose: "Mum went out with a sailor."
The Doctor: "I bet she did."

The Wire: "This world of yours is busy, busy, busy forging ahead into a brand new age. You can never go back. That's your tragedy."

The Doctor: "Are you suggesting that the Queen does the housework?"

Tommy: "You fought against Fascism, remember? People telling you how to live, who you could be friends with, who you could fall in love with, who could live, and who had to die. Don't you get it? You were fighting so that little twerps like me could do what we want, say what we want. Now you've become just like them."

Continuity: The Doctor has a moped in the TARDIS with the registration number YWV 140, but leaves it with Tommy. He says that what he likes about Rose is the domestic approach. He knows that you can't wrap your hand around your elbow and have your fingers meet. Seeing Rose become a victim of the wire, he decides that there is no power on Earth that can stop him from finding and stopping it. He can taste the iron-like taste of Bakelite. He wears rubber soles.

Jackie Tyler is a Cliff Richard fan. At one point she went out with a sailor, and Rose learnt that the British national flag is the Union Jack when flown at sea and the Union Flag on land. She also learnt which way up it is supposed to fly.

The wire is an energy being which is capable of sucking off peoples' faces. She was executed by her own people, but escaped into a non-corporeal form and fled to Earth.

Extras: This story has an episode of Doctor Who Confidential. The BBC created a one-minute trailer called a "Tardisode" for each episode of series two, which was available to download on your mobile or watch at the BBC website. They also made a commentary track available online, and with the red button during the digital repeats. Neither of these are still available online.

The Bottom Line: 'That's what television does.' Despite some great concepts ,dialogue, character pieces, and period feel, The Idiot's Lantern disappoints. The characters of Mr Connolly and Detective-Inspector Bishop are two-dimensional, and the conclusion is quite poor - the ease with which the Wire is defeated, and the baffling return to normality of all the people she's fed on leave you feeling that there should have been more to this story.

Other Guides to this Story