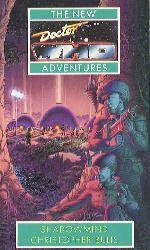 Goofs: TARDIS is again said to stand for Time And Relative Dimensions In Space, rather than Dimension. [Though this is so widespread it's debatable whether it's a goof anymore - ed]

Technobabble: Hypergems are rare crystals that can transmit low-energy, wide-band signals between matched pairs of crystals instantaneously through hyperspace without any extra energy input or transmission equipment. They are prepared from the parent ore by being thrown at a hard surface, whereupon they break into pairs of hypergems. They can also be used as a psionic interface. Properly aligned their range is almost limitless.

Dialogue Disasters: I mean the number of these experiences you keep getting into...'
'Don't be coy, call them adventures.'
'...these adventures, then.'

All of Umbra's childlike dialogue.

Dialogue Triumphs: 'Specialists? I am a specialist.
'A specialist in what, sir?'
'Almost everything - I generalize in specialities.'

'We understand that if your body dies, all that is you dies. You are a nest-of-one. We wonder, how do you survive being so vulnerable?'

Continuity: Umbra was created when a comet in Arden's system came unusually close to an asteroid at a gravitationally stable L4 point, sixty degrees ahead of Arden in its orbit and equidistant from Arden and its sun. This resulted in the asteroid being rotationally locked to the sun and covered in unusual carbon deposits and other trace impurities. Because one hemisphere of the asteroid was always light and the other always dark, there was a current flow through a semi-conductive medium due to the thermocouple effect, which created an analogue of a neural cell, which started to reproduce. The neural net spread out until it covered the asteroid, but then discovered that it couldn't grow any further, so it reached out telepathically to Arden and took control of a Shenn nest, which it directed to build more bodies for itself. It took the name Umbra from the language of the humans. Umbra is telepathic and control carbon to create mobile, shape-changing, versatile "shadowforms" including the black ship. It can also manipulate human minds. Despite its power and abilities, Umbra is still an adolescent. The Doctor renders it catatonic by blocking the flow of sunlight onto its asteroid.

The Shenn are native to Arden and live in nests or burrows. They have existed for thousands and years and individual Shenn telepathically link minds to form group intelligence; each nest therefore comprises a single group mind. The effect is limited, so that an individual Shenn a long distance from the nest is not very intelligent. They use hypergems to increase their telepathic range over distance. Shenn resemble a cross between miniature monkeys and upright bipedal rats. They are covered in brown fur, and have a vestigial tail and five-fingered hands. The head is proportionally large for the body. They used the shells and carcasses of other animals for disguise and protection, and gradually evolved the principle until they learned to create the duplicates. They can use the minds of the originals to animate the duplicate in a natural way. Their technology is organic; the exoform bodies that the Shenn construct to impersonate humans are organic hybrids, part human clone with additional components resembling organic plastics, plant sap, resin, and vegetable-like fibres. The Shenn also have the ability to create partial duplicates, and create such a duplicate of Gerry Ostman's head to allow them to translate their language into words that humans can understand. They use tame birds as messengers. One Shenn nest on Arden specializes in bioengineering flying transportation animals that resemble miniature zeppelins with wings.

Arden has more than one continent. Lake Lysander and the Titania river are located on the northern continent, as is Touchstone Base, the largest settlement on the planet. Oberon is another base, and is near the Phebe Range of mountains. Flora brought to Arden by the human colonists includes apples and oak nuts. Hypergems are found on Arden and is a black glass like substance; the colonist name it Oberonite and are unable to make an accurate chemical analysis of theirs structure due to some trace impurity, and when they try x-ray diffraction to see if it has a lattice structure it reduces to dust.

The Doctor uses the TARDIS' telepathic induction circuits to revisit his past due to what he calls "pre-millennial angst". He slightly misaligns the control settings, causing Bernice and Ace to experience both their own and his pasts. The Doctor is still wearing his cream-coloured linen suit and brogues (White Darkness). He provides identification and credit cards for Ace and Benny for use on Tairngire, which he insists are perfectly valid. He carries a catapult and a jeweller's lens. By 2673AD he has unlimited credit with the First Galactic Bank. He builds a device for detecting Shenn duplicates and later builds a simpler version, which resembles a heavy-duty electric torch with a laser sight mounted on top. He changes into battle dress for the mission to Arden.

Ace thinks that she is starting to look like her mother. She played statues as a child. She has a birthday here, although it isn't specified exactly how old she is. Ace's combat suit has "ACE" emblazoned on the back in glitter. She has constructed a matching helmet with various functions from the dome of a Black Dalek Supreme; amongst other things, she can see through the image intensifier in the Dalek eyeball on the front. The Doctor persuades her to change out of her combat suit, so she instead dons black jeans, black tea-shirt with silver trimmings, and her old bomber jacket. She has developed a new variant on nitro nine, which she calls neo-nitro. It resembles a small white gobstopper. It is perfectly stable until activated by saliva; if the user accidentally swallows it whilst activating it, it breaks down harmlessly in the gastric juices, producing nothing more than heartburn. She has sex with Santony on board the Broadsword, "just for fun". She is familiar with Lamaplex C "parachutes". She gets a broken arm and two broken legs plus numerous bruises and abrasions during the jump, but is healed with the aid of the Shenn. Her combat suit is also damaged, but the Shenn "rebond" it after they have cut it off her. She convinces them to create a duplicate of her, which her mind can use to move around in whilst her real body heals, although this requires them to cut a hole in the top of her head and insert a hypergem.

The Console Room currently contains a Sheraton chair, a Chippendale, the hatstand, a strange-looking plant with feather-like fronds in a Chinese pot, a brass bound sea chest, and two carved stands, one with a bust of Napoleon on it, the other with the Ormulu clock. Ace's room in the TARDIS has a clean-and-repair unit for clothing.

Links: Bernice briefly gets a glimpse of the First Doctor, and the Doctor calls her Barbara and Ace Susan. The Doctor recalls mediating between Earth and Draconia (Frontier in Space). He also mentions travelling with Marco Polo (Marco Polo). There are references to Jan (Love and War), Haiti and zombies (White Darkness), Iceworld (Dragonfire), Daleks, Cybermen, Yeti (The Abominable Snowmen, The Web of Fear), Ice Warriors, Autons (Spearhead from Space, Terror of the Autons), and the Brigadier.

The Doctor tells Ace and Bernice that he's thinking about taking a holiday on his own, leading into Birthright and Iceberg.

Umbra first makes contact with a Shenn nest on Arden c2643AD. The Edonians claim colonization rights of Arden at the same time as humanity; the planet is settled in 2670AD.

By 2673AD Xaxil, the twenty-fourth Emperor of Draconia rules the Draconian Empire.

The Bottom Line: 'Next time I ask you to take me somewhere for a birthday treat, just kick me down a flight of stairs instead - it'll be less painful.' Largely bland and forgettable, although Ace's dilemma on the Broadsword at the end is quite haunting. Shadowmind is neither the best nor worst thing that Bulis has written, but it is unremittingly pedestrian and Umbra is a very dull villain.

I quite liked Shadowmind, from the Invasion of the Bodysnatchers-style intrigue to the sudden shift into military SF. I loved the scene where the Doctor revealed the duplicates, blowing the lid off their conspiracy, and Ace's dilemma at the end was horrifying. Umbra was a bit of a mess though, feeling almost tacked-on when the evil Shenn faction made strong enough enemies on their own. We get no insight at all into them, and after Umbra's defeat the novel ends very abruptly. I also question the point of Bernice seeing the First Doctor for a moment instead of the Seventh. That never became important to the plot, so why have it? I also found it suffered from too many named characters, much like Lucifer Rising, making it hard to keep track of everyone. On the whole though, I'm glad I read Shadowmind.

END_OF_DOCUMENT_TOKEN_TO_BE_REPLACED

Doctor Who is both copyrighted and trademarked by the BBC. The rights to various characters, alien races, and other fictional elements from the series are owned by the writers who created them. In particular, the Daleks are owned by the estate of Terry Nation. No infringement of any copyright is intended by any part of this site, which is an unlicensed reference and review site. All credited material on this site is copyright © the named author. All other material is copyright © Stephen Gray 2004-2018. The whoniverse logo and design were created by Tom Hey (that link is to his band's site). The site was constructed using Drupal. All comments are owned by, and are the sole legal responsibility of, the individual posters. You may not reproduce any material from this site without the permission of the relevant author(s). If you want to use what we've written, ask us and we might just say yes.